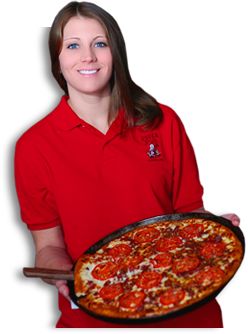 History of Harry´s Pizza and the Pizza Pub

Harry´s Pizza was named after Harry Koehler of Johnstown, Pennsylvania, who in the early 1950s owned five pizza shops in the Johnstown/Altoona area. Clarion was originally introduced to Harry´s Pizza in 1960 when Pete and Germaine Schill opened their Harry´s Pizza Shop on Main Street where the Immaculate Conception Church is now located. Pete began in the pizza business with the encouragement of his sister, Bernice Bowser, who at the time owned and operated 24 Harry´s Pizza Shops in western Pennsylvania. Harry´s Pizza Shops were unique in that pizza was only sold by the slice and only through takeouts, no dine-in or delivery was offered. Pizza and soft drinks were the only items on the menu.

In 1975, the Harry’s Pizza Shop in Clarion was closed to make way for the new Immaculate Conception Church. Today, the tradition continues at the Pizza Pub with Harry´s Pizza being available by the slice on Monday, Tuesday, and Wednesday evenings.

On April 10, 1973, Pete and Germaine opened the Pizza Pub in its current location. The building previously had been a Laundromat and prior to that a Service station that also sold Studebakers. The red bricks located inside and outside of the Pub were used from a collapsed portion of a home located on Rt.332 in Strattanville. These bricks were originally brought from Philadelphia in the early 1800s in Conestoga wagons.

The Pizza Pub logo, with its familiar relaxing dog, is actually a tribute to a favorite pet of Bernice Browser, a poodle named Pixie.

The Pizza Pub has always been a family business and is currently owned and operated by Pete and Germaine’s son, Mike, and his wife, Jean. The entire Schill family would like to thank the Clarion community as well as former and present employees for their dedication to the Pizza Pub throughout the years.